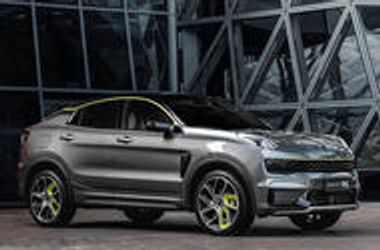 Image source : autocar.co.uk
Lynk&Co 05 Geely's ambitious, Europe-bound Chinese brand showcases its fifth model Chinese brand Lynk&Co , which is owned by Volvo's parent company, Geely, has unveiled its fourth model, the 05 coupé-SUV. The BMW X4 rival joins the 01 SUV, 02 crossover and 03 saloon in the line-up. A fifth model,a family hatchback called the 04 , is yet to be revealed.  While only limited technical details of the 05 are known, it's based on the Volvo-developed CMA platform, like its siblings, and takes many of its styling cues from the similar-size 01. The 05 is 4592mm long, with a wheelbase of 2734mm. When the 05 goes on sales in China, it will have an electrified 2.0-litre engine sending 251bhp and 258lb ft to all four wheels through an eight-speed automatic gearbox. Inside, the dashboard is dominated by a 12.7in touchscreen. Lynk&Co, which is focused on younger customers with a subscription-focused business model , has ambitions to expand into Europe, particularly with th
▶ Full story on autocar.co.uk

Megan Fox gives a peek at her toned midriff in bralette on rare outing with Machine Gun Kelly in LA   The 34-year-old actress looked casual cool while heading out for a date night with 30-year-old rapper boyfriend in Los Angeles ...

Drew Barrymore tells Paris she too was placed in solitary confinement   While talking with guest Paris Hilton about her documentary This Is Paris the 45-year-old Charlie's Angeles actress shared she had also been placed in...

Ghosts cast reveal grisly plague scenes BBC bosses were forced to axe amid coronavirus pandemic   BBC Ghosts actors have opened up on the sheer irony of being forced to tweak a mass plague scene – as a real-life pandemic had...

How Myra Hindley wooed Rose West in jail before two the killers became lovers   ITV documentary Rose West and Myra Hindley: Their Untold Story With Trevor McDonald explores the bizarre romance between two of Britain's most...

Security guard raped woman who got in his patrol car believing it was an Uber   A SECURITY guard raped a vulnerable young woman after she got in his car mistaking it for an Uber. Sola Warikwah drove the victim, aged in her 20s,...

Katie Price's beau Carl Woods agrees to start trying for a BABY   Speaking on new YouTube channel The Adventures Of Katie And Carl, the couple discussed their future plans after the former glamour model, 42, purchased an...

I think my boyfriend has autism, should I walk away?   DEAR DEIDRE: THE more I get to know my boyfriend, the more I think he has Asperger’s or autism and I just can’t cope any longer. I met him online. He’s a good-looking...

Jennifer Aniston's ex Justin Theroux sweetly shows support for her at Emmy Awards   Jennifer Aniston delighted fans on Sunday night with a behind-the-scenes photo of herself...

Game of Thrones' Hafþór Júlíus Björnsson says he could miss the birth of his son in quarantine   The actor, 31, revealed on Instagram that he was coming up to the end of a seven-day quarantine after previously being in close...

Best home tech for fall 2020: Coffee makers, fire pits and other cozy products - CNET   These gadgets will help keep you cozy in the colder seasons.

Volkswagen ID 4 owners will receive unlimited free charging - Roadshow   Well, for the first three years. Then the charging cost is on you.

'Northern lights' seen at Rosetta's famous comet for the first time - CNET   Years after the mission landed on Comet Chury, a new phenomenon has been excavated from its data.