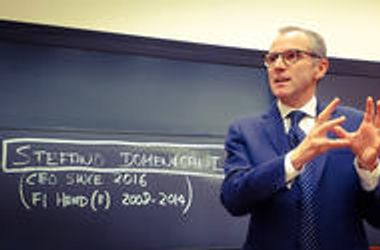 Image source : autocar.co.uk
Stefano Domenicali Former Ferrari F1 team boss leaves Italian firm to take up role overseeing the sport Lamborghini  boss Stefano Domenicali will leave the firm to become the new president and CEO of Formula 1, it has been confirmed. First reported by F1 website RaceFans , Domenicali will take over from current F1 boss Chase Carey, who has run the sport on behalf of owners Liberty Media since 2017, in January next year. Liberty Media boss Greg Maffei said: “Stefano brings a rich history of success in F1 at Ferrari and the broader auto industry at Audi and Lamborghini.” Domenicali, 55, was previously the head of the Ferrari F1 team, a role he held from 2002 until he quit in 2014. He then joined Audi in October 2014, before switching over to take over fellow Volkswagen Group-owned Lamborghini in 2016. He has also served as president of the FIA's Single Seater Commission. Domenicali said that F1 "has always been part of my life", noting that he was born close to Imola and
▶ Full story on autocar.co.uk

Chinese Horoscope: What is a Wood Snake and what year is it?   WHILE you may know your star sign off the top of your head, you may not know what animal you are in the Chinese Zodiac. Repeating every 12 years, the animal cycle...

James and Ola Jordan: Nicola Adams surprised us and why Caroline and Ranvir were overmarked   Strictly Come Dancing fans were in for a treat on Saturday night after the celebrities...

Pregnant Camilla Thurlow reveals she's 'a few days' overdue   The Love Island star, 31, who is expecting her first child with partner Jamie Jewitt, 30, took to Instagram on Sunday to share an update on the last stages of her...

Sharon Osbourne felt 'afraid and alone' after abortion at 18: 'I was terrified to tell my parents'   The 68-year-old Daytime Emmy-winning co-host said it was 'like this shame I brought on to this family'

Heidi Klum leans into her Halloween spirit with spooky spider and skeleton filters on Instagram   The 47-year-old supermodel looked ready for the scary season as she shared a few selfies before Halloween.

Liverpool Echo ~ 16:00 PM GMT October 25, 2020
● Rita Ora looks sensational as she poses in a tiny bikini in sizzling holiday snaps   RITA Ora gave fans a treat on Sunday as she shared some rather sexy throwback snaps. Rita, 29, took to Instagram to admit she was suffering...

Lauren Goodger shares sweet text exchange with new boyfriend Charles Drury   In the WhatsApp conversation shared to Instagram on Sunday, the former TOWIE star, 34, gushed about kissing her toyboy, 23, 'in his sleep' as...

Who was Stevie Nicks married to?   FLEETWOOD Mac frontwoman Stevie Nicks was once married to her late friend’s partner Kim Anderson. The two were married for three months before Nicks realized she had made a mistake. Who was...

Pregnant Ashley James reveals her pelvic girdle pain is 'out of control'   Taking to Instagram on Sunday on the last day of her babymoon, the former Made In Chelsea star, 33, got candid about her struggles as she came to the 30...

Ashley Park opens up about undergoing chemotherapy after she was diagnosed with leukemia at 15   'But, I also appreciate when I'm not asked to talk about the experience, or about how it's informed how I've lived...

Gemma Atkinson cuts a casual figure during a shopping trip while husband Gorka is away on Strictly   The actress, 35, was seen exiting The Trafford Centre in Manchester on Saturday, while her dancing husband, Gorka Marquez, is...

Drake wears a camouflage sweater as he departs Nobu Malibu after celebrating his 34th birthday   The Tootsie Slide rapper was seen getting into his black car as he exited the restaurant located on Pacific Coast Highway.

Glamour ~ 15:30 PM GMT October 25, 2020
● Zara McDermott displays her ample assets in a lilac bikini amid Sam Thompson cheating scandal   The Love Island star, 23, shared a throwback snap from her Mykonos getaway with Sam Thompson, as she wished to 'go back' to...

Mail Online ~ 15:15 PM GMT October 25, 2020
● Simone Holtznagel flaunts her eye-popping assets as she strikes a pose in a chic shirt dress   She's gained a legion of fans with her racy bikini selfies. But on Sunday, Simone Holtznagel proved she certainly didn't need ...

Best cheap home security cameras to buy in 2020 - CNET   Want to keep an eye on things for less? We've got you covered.

Ferne McCann channels her inner Beyoncé as she performs in heels   The former TOWIE star, 30, looked incredible in a khaki and black two-piece with a crop top and leggings as she pulled her best move for the dance fitness routine