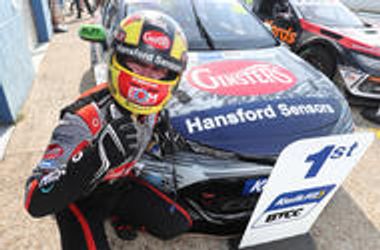 Image source : autocar.co.uk
Success in first two races at Thruxton came alongside victories in the WRC and at Le Mans Tom Ingram added to a hugely successful weekend of motorsport for Toyota with a pair of British Touring Car Championship victories at Thruxton. The Corolla driver dominated the opening two races at the high-speed Hampshire track to take his first wins of the season, completing a hat trick of motorsport victories which saw Toyota WRC driver claim the top spot at Rally Turkey, andToyota Gazoo Racing winning outright at Le Mans for the third year in a row.  Elfyn Evans BTC Racing Honda Civic Type R driver Josh Cook bounced back from a recent run of misfortune with a win in the third race. Infiniti Q50 racer Ash Sutton produced a series of solid results to claim the points lead afterBMW ace Colin Turkington had a difficult weekend due to a mechanical issue in the opener. Works Honda driver Dan Cammish qualified on pole, but Ingram blasted past at the start and then withstood race-long pressure f
▶ Full story on autocar.co.uk

Amanda Holden shares memories of growing up on a housing estate   Amanda Holden might own two incredible properties in Surrey and the Cotswolds, but she had...

Strictly's Nicola Adams arrives for training after Ella Baig threw her a surprise birthday party    Nicola was pictured arriving for another day of training on Tuesday, after her fun night in with Ella and her Strictly dance...

Louise Redknapp reveals why she'll never have a boyfriend   Louise Redknapp confessed she hasn't been on a single date since her divorce from Jamie...

Zara McDermott wows in black hotpants and a TINY white crop top for new racy photoshoot   The former Love Island star, 23, looked incredible as she put on a very leggy display in a pair of black hotpants.

Braless Chloe Ferry showcases her surgically-enhanced figure   The Geordie Shore star, 25, left little to the imagination in her white cotton crop top while she paired the ensemble with high-waisted jeans

Aldi is launching an Advent calendar range in stores this week   Find Christmas countdown for kids, grown ups and pets

Michael Jackson's long-lost horror film released for FREE   MICHAEL JACKSON created a massive amount of content for his fans over the years, including some short movies. Now, the King of Pop's estate is about to release a...

Space Crew Nintendo Switch review: Should you boldly go for new strategy game?   SPACE CREW sends players into the final frontier with a thirst for knowledge, excitement, and adventure - but does it live up to the other space...

Who is in the cast of Holidate on Netflix?   IT’S getting to that time of year when we all want to settle in for the night with a cosy festive film. Netflix’s Holidate is about two strangers who are fed up with the single life...

How Kelly Ripa transformed her lifestyle choices and diet   Kelly Ripa takes great care of her body and has an impressive fitness routine as well as a...