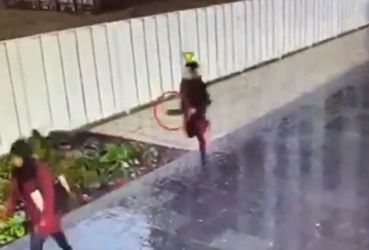 Image source : thesun.co.uk
THIS is the moment a teen killer flees from the scene of a horrific murder clutching a huge zombie knife. The 17-year-old, who cannot be named because of his age, stabbed Louis Johnson to death at East Croydon station in London on the afternoon of January 27. Footage released by the British Transport Police shows […]
▶ Full story on thesun.co.uk

Turiff mum tells of moment she pulled girl submerged in flood water to safety   A mum whose quick-thinking saw her drag a young girl from a flooded burn believes she did what any other bystander would have done.

James May reassures Grand Tour fans 'nothing is cancelled' amid Covid concerns   James May has shared an update on The Grand Tour, telling that nothing has been cancelled but may need to be put on hold

Funding boost to help Cairngorms ski slope cash in on expected bumper winter season   One of the north-east’s premier ski centres has received a £300,000 funding boost to ensure it can capitalise amid predictions of a bumper...

Woman who has been hospitalised by eczema praises £7.99 ointment   By sharing her story, Hannah Hopkins hopes to raise awareness of the emotional toll that skin conditions can take and offer hope to others living with them

Death toll rises in Aegean earthquake as rescue teams race to reach survivors   Rescue teams on Saturday plowed through concrete blocks and debris of eight collapsed buildings in search of survivors of a powerful earthquake that ...

France 24 ~ 06:41 AM GMT October 31, 2020
● 'Marcus Rashford has changed the country' - what a year for the Man Utd forward   To celebrate Marcus Rashford's 23rd birthday BBC Sport takes a look back at the Manchester United striker's year.

Davy McCracken: Projects focus on good flock nutrition and management   The raising of sheep for meat and milk production is important within Europe and plays a key social, economic and environmental role in many “less favoured...

Press and Journal ~ 06:35 AM GMT October 31, 2020
● Thinking Anew: Evoking all the saints known and unknown   When the Saints Go Marching In was a Christian hymn before it became a jazz classic

No going back! Meghan Markle and Prince Harry warned project could be 'the END' as royals   MEGHAN MARKLE and Prince Harry's split from the Royal Family could inadvertently be "finalised" if they "break the...

Daily Express ~ 06:30 AM GMT October 31, 2020
● Prince Harry's escape: How Archewell with Meghan will help Duke FINALLY flee 'royal curse'   MEGHAN MARKLE and Prince Harry's foundation Archewell will give the Duke of Sussex a chance to "escape the curse of the...

Mum slashes weekly food bill from £60 to £10 thanks to yellow stickers   Overnight, Kelly Costa went from having plenty of cash to surviving off disability benefit, carer’s allowance and Universal Credit

HIAL pushes ahead with centralisation of air traffic control by seeking contractor for simulator to train controllers   Highlands and Islands Airports (HIAL) is seeking a contractor to provide a state-of-the-art simulator to...

'Red mirage': the 'insidious' scenario if Trump declares an early victory   The situation could develop if the president appears to be leading on election night before all votes are counted – and for some officials, it’s too...

The Guardian ~ 06:15 AM GMT October 31, 2020
● 'I can't remember feeling more sorry for myself': Rookie reverend Matt Woodcock   As an ordained Church of England minister, The Rev Matt Woodcock accepts there are probably some things he should never admit to.

York Press ~ 06:12 AM GMT October 31, 2020
● Rare 'blue moon' to enchant Halloween stargazers   A full moon at Halloween is a rare event but this year it is a blue moon which is even more unusual.

TV tonight: Spitting Image returns for the US election   Puppet Donald Trump and Joe Biden go head-to-head in a two-part special of the satire. Plus: The Story of the Style Council. Here’s what to watch this evening Continue...