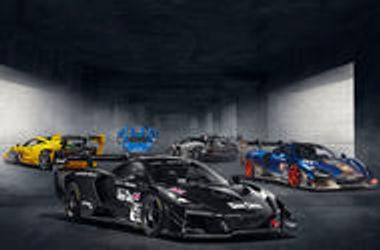 Image source : autocar.co.uk
Five customer-commissioned Senna GTRs feature accurately recreated liveries and enhanced performance McLaren’s MSO bespoke division has unwrapped five customer-commissioned special editions of the track-only Senna GTR hypercar to commemorate the 25th anniversary of the firm’s historic victory in the Le Mans 24 Hours. Called Senna GTR LM in reference to the F1 GTR LM that took the first, second, fourth, fifth and 13th positions at La Sarthe in 1995, each wears a unique retro-inspired livery modelled on the race cars themselves.  McLaren says each car took at least 800 hours to handpaint, after special permission from brands including Gulf, Harrods and Automobile Club de l’Ouest (ACO) to recreate the sponsorship logos worn by the original F1s. The only piece of vinyl applied to the cars is a faithfully recreated scrutineering sticker on the roof.  Inside, a build plaque bears the chassis number of each car’s Le Mans ‘twin’, and an etched dedication shows the date of the 1995 race, as w
▶ Full story on autocar.co.uk

Shameless star Jody Latham, 38, reveals he is now a MILLIONAIRE   The actor, 38, spoke to MailOnline about his success and detailed how a chance exchange with an extra on the show - which ran from 2005 to 2013 -

Simon Cowell 'gains weight and takes break from his vegan diet to help recover from back surgery'   According to his close friend Sinitta, the mogul, 61, who had shed 60 pounds, has returned to eating calcium and has upped his...

Lily Allen reveals she wants to have kids with husband David Harbour   The 35-year-old singer already has daughters Ethel, eight, and Marnie, seven, with her ex-husband Sam Cooper.

Holiday Inn hotel transformed into concert venue with live gigs from your bedroom   A HOLIDAY Inn hotel has transformed itself into a gig venue where families can watch live concerts from their hotel room. Guests staying at the...

Strictly supportive! Nadine Coyle holds hands with ex Jason Bell after his debut   The Girls Aloud singer, 35, and her American football star, 42, appeared to be closer than ever as they exited the Borehamwood venue in a car...

Best Nest and Google Assistant devices of 2020 - CNET   From smart displays and speakers to light bulbs and locks, building a whole smart home with Google Assistant is easy. These are our top picks.

Photos shot on iPhone 12 Pro around Lake Tahoe - CNET   A day around the lake using the three lenses on Apple's new iPhone 12 Pro, and the software updates.

CNET News ~ 12:00 PM GMT October 25, 2020
● Sex Education series three FIRST LOOK   The actress, 52, was spotted on set of the third series of the hit show with a fake baby bump this week as filming continued in Symonds Yat in Gloucestershire.

Ruth Langsford debuts long blonde hair in Strictly throwback   Ruth Langsford's fans may be used to seeing her with her iconic blonde bob, but she...

Jamie Laing looks low-key as he steps out the morning after Strictly debut   Jamie Laing stepped out on Sunday morning in sweats to pick up some supplies, following his Strictly Come Dancing debut.

Elvis Presley: Guess which of The King's songs was released 26 YEARS after he recorded it?   ELVIS PRESLEY recorded a song in 1957 that wasn't released until six years after his death, can you guess which one?

Love Island's Belle Hassan puts on a busty display in a racy criss-cross bralette   The reality star, 25, set pulses racing as she emphasised her ample assets and slender curves in her revealing ensemble, while arriving at Jaks...

Cher commands attention in a glitzy jacket as she campaigns for Joe Biden and Kamala Harris   The singer, 74, emphasised her slender silhouette in her giltzy jacket and slim-fitted trousers as she campaigned for the democratic...