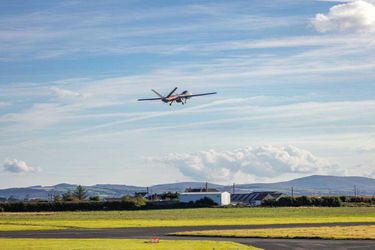 Image source : thesun.co.uk
DRONES similar to those used to blast terrorists in Syria and Afghanistan could replace police helicopters and fight domestic crims like Extinction Rebellion. Cops in Wales used a high tech Elbit Systems Hermes 900 drone in simulation exercises which would normally be carried out by police choppers. The Hermes 900 is similar to the RAF’s […]
▶ Full story on thesun.co.uk

SAS Australia: Huge salaries of the celebrity recruits are revealed   They've had to fall out of helicopters and crawl across mud in the freezing cold, but the celebrities on SAS Australia were well compensated for their...

Selling Sunset's Christine Quinn is stylish in designer jacket and skinny jeans at pumpkin patch   The 31-year-old blonde wore a brown newsboy cap over her long blonde hair and sported dramatic sunglasses, but no face mask.

Did Joe Biden call Donald Trump xenophobic?   PRESIDENT Trump and Joe Biden took part in the final presidential debate on October 22 at 9 pm EST. During one of the topic debates Trump accused Biden of calling him xenophobic...

The Sun ~ 01:43 AM GMT October 23, 2020
● Sarah Paulson plays the gaslighting mother from hell in first trailer for Hulu horror movie Run   Newcomer Kiera Allen makes history as the first disabled actress to lead a thriller for an American studio in 70 years

Anne Hathaway and her coven will put a spell on you: BRIAN VINER reviews The Witches    BRIAN VINER: The imagination of Roald Dahl and the ingenuity of director Robert Zemeckis make an enchantingly heady brew in The Witches.

Robbie Williams steps out with stylish wife Ayda Field for a spot of shopping in Milan   The singer, 46, cut a fashionable figure in a brown leather jacket with silver zips and a shearling collar as he went shopping with his...

Victoria Derbyshire 'has signed up to star in I'm A Celebrity'   The BBC journalist, 52, is said to be 'really looking forward' to be joining the line-up, according to a report from The Sun on Thursday.

I'm A Celebrity FIRST LOOK: Fans get a glimpse of revamped Gwrych Castle   After weeks of builders working round-the-clock to restore the Welsh landmark, the finishing touches are being added, with plenty of new additions to...