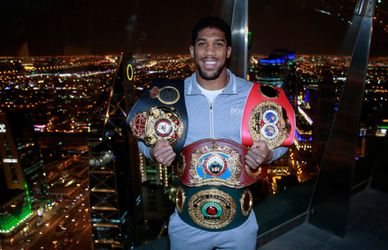 Image source : thesun.co.uk
ANTHONY JOSHUA has confirmed he will step back into the ring in March to defend his heavyweight belts. The Brit became a two-time world champ after getting revenge on Andy Ruiz Jr on Saturday six months after his shock defeat. AJ, 30, is likely to fight mandatory challengers Oleksandr Usyk or Bulgarian Kubrat Pulev. More […]
▶ Full story on thesun.co.uk

● Joshua Buatsi delighted to be back in the saddle as he targets Anthony Yarde and Callum Johnson
The Sun   - 21:30 PM GMT September 19, 2020

● Anthony Joshua vs Tyson Fury tale of the tape: How Brits compare ahead of blockbuster bouts as they agree two-fight deal
The Sun   - 11:30 AM GMT September 18, 2020

'Mbappe's best position? Next to Neymar!' - PSG boss Tuchel   The Brazilian was unavailable through suspension but his attacking partner was still on the scoresheet despite only recently recovering from Covid-19

LIVE: Chelsea vs Liverpool   Frank Lampard's new-look Blues would make a huge statement if they can put the Premier League champions to the sword - follow it LIVE!

Toulouse 36-8 Ulster: Irish side crash out of Champions Cup after South Africa's Kolbe scores twice   Kolbe showed his class at the beginning and end of the first half as he twice stepped inside Irish wing Jacob Stockdale to...

Jose Mourinho sends loaded Spurs transfer clue as Dele Alli speculation heats up   Mourinho was quick to show his love for Harry Kane in the wake of the club captain's four assists and a goal against the Saints.

Thiago cried in my arms for five minutes after Liverpool deal was done - Rummenigge   The Spanish midfielder made the move to Anfield on Friday, but not before a tearful meeting with the CEO and the staff at Bayern

Richard Keys issues defiant response after "smash it" is included in Cameo bio   Richard Keys left Sky Sports back in 2011 after making distasteful comments about assistant referee Sian Massey, and has gone on to work...

ISL: Chennaiyin's Csaba Laszlo - Player mentality will be the challenge in Goa   The Chennaiyin head coach is prepared to help his players focus on their objectives in Goa...

Manchester United told to consider Marcelo Bielsa to replace Solskjaer   United got off to the worst possible start to their Premier League campaign after a 3-1 defeat to Crystal Palace on Sunday.

Guardiola swipes at Foden critics after Man City midfielder's coronavirus protocol breach in Iceland   The Catalan urged detractors to concentrate on themselves after the 20-year-old and Mason Greenwood brought themselves into...

Kemar Roofe joins Ryan Jack in Celtic clash sweat as Rangers star faces 'short-term' out   Kemar Roofe has joined Ryan Jack on the treatment table with the season's first Glasgow derby with Celtic on the horizon.