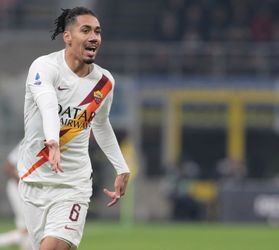 Image source : thesun.co.uk
ARSENAL are ready to revive Chris Smalling’s career in the Premier League by making a move next summer, according to reports. The England international has been in sensational form on-loan at Roma this season after falling out of favour at Manchester United. Smalling, 30, was even watched by Three Lions boss Gareth Southgate as he […]
▶ Full story on thesun.co.uk

The Scotsman ~ 13:11 PM GMT January 23, 2020
● 1pm Chelsea transfer news LIVE: Cavani £12m loan bid, Sancho replacements lined up by Dortmund, Pope to replace Kepa   CHELSEA’S January window could finally be hotting up as Frank Lampard looks to use some of his £150m transfer ...

The Sun ~ 13:11 PM GMT January 23, 2020
● 1pm Arsenal transfer news LIVE: Matviyenko in talks, Kurzawa £4.2m asking price, Aubameyang to Barcelona   ARSENAL have been linked with a centre-back… and it’s not Jerome Boateng or Dayot Upamecano. The Gunners are reportedly...

QPR putting Chelsea to shame with conveyor belt of talent after Dalling becomes 18TH youngster to make debut in 6 years   MOVE over Chelsea, there is another club in West London with a stunning track record for blooding young...

Cahill offers Halep donation discount for reaching Melbourne third round   When Simona Halep pledged to donate A$200 ($137) to bushfire relief every time she gave her coach a hard time during her matches in Australia this month, ...

Archer, Wood could play in Johannesburg   England could pick Jofra Archer and Mark Wood in the same Test team for the first time as they look to seal a series win over South Africa in Johannesburg.

Jorge Mendes 'flies to Barcelona for talks over Valencia striker Rodrigo'   Due to his relationship with Valencia owner Peter Lim, Mendes is believed to be able to strike a deal with Barca, according to Spanish newspaper Mundo...

Pep Guardiola hails David Silva as one of Man City's 'top five' players EVER   The 34-year-old midfielder announced he will be walking away from the Etihad this summer on the back of a stunning ten years in Manchester, and Pep...

Messi backed to return to Argentina by former Barcelona team-mate Mascherano   The Estudiantes midfielder would like to see the "best player in the world" playing in his homeland again before the end of his illustrious ...

Finn Russell leaves Scotland Six Nations camp and could be out for tournament, according to reports   Scotland playmaker Finn Russell is said to have departed the country's Six Nations training camp.

Saracens' salary cap report FINALLY published by Premiership Rugby   The England and European champions were fined £5.36m and docked 35 league points after a hearing found they failed to disclose payments to players and exceeded ...

Nadal dominates Delbonis to ease into third round in Melbourne   Top seed Rafa Nadal continued his relentless progress through the Australian Open draw on Thursday, muscling his way into the third round with a commanding 6-3...