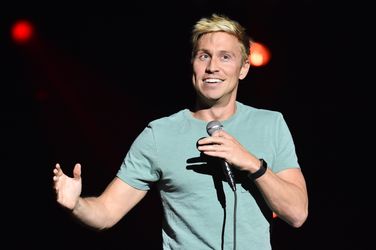 Image source : thesun.co.uk
RUSSELL Howard cancelled his performance and stormed off stage after catching an audience member filming him. The comedian was reportedly five minutes into his set at Bristol outdoor terrace bar Bambalan in the city centre. Russell became annoyed when he noticed a woman in the front row point her phone at him. The funnyman – […]
▶ Full story on thesun.co.uk

Lady Leshurr is the tenth star CONFIRMED to appear in Dancing on Ice 2021   The star, 30, joined Jordan Banjo and Perri Kiely on Wednesday's KISS Radio breakfast show to announce the news, and admitted she's already...

Frankie Bridge reveals husband Wayne has threatened to MOVE OUT if they have a third child   The Saturdays star, 31, who shares sons Parker, six, and Carter, five, with the footballer, spoke about the clash in her household over ...

Green Homes Grant scheme: How to apply and how it works explained   HOMEOWNERS will be given £5,000 in energy saving vouchers to help them insulate their homes – and you can apply from today. There are just 600,000 vouchers up...

'We paid them to leave us alone!' Amy Hembrow reveals the scary reality behind being an influencer   Many girls dream of becoming social media influencers, but the Hembrow sisters made it their reality.

How Australian actor Luke Bracey became Hollywood's HOTTEST new hunk   It has been eleven years since he made his soap debut with the recurring role of Trey Palmer in the long-running series, Home and Away.

Bella Thorne lives her goth fantasy at dinner with boyfriend Benjamin Mascolo in West Hollywood   Bella also took to her profile with a behind-the-scenes photo from her Stupid F***ing B**** music video, which she dropped the...

Dolly Parton leads Christine Baranski and Jenifer Lewis in Netflix musical Christmas On The Square   Baranski stars as Regina, a rich woman with a heart of coal, who returns to her small hometown after her father's death,...

Mail Online ~ 06:34 AM GMT September 30, 2020
● Sex after heart attack: Intimacy in bed boosts rates of survival   Resumption of the frequency of sexual activity within the first months after a heart attack was linked to improved survival in the long run.

Lara Bingle shows off her incredibly toned post-baby body in a crop top and leggings doing Pilates   She welcomed her third son with husband Sam Worthington in June.

Who left Bake Off 2020 last night?   THE Great British Bake Off is back with a bang but week two saw another baker’s journey come to an end. For episode two the theme was biscuits and the eleven remaining hopefuls were tasked...