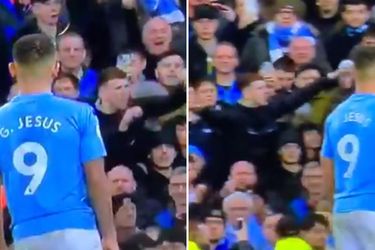 Image source : thesun.co.uk
MANCHESTER CITY have been further tainted after footage of one of their fans appearing to taunt rivals United over the Munich air disaster emerged. City have already been forced to offer their help to the police after one of their supporters allegedly made monkey gestures towards Manchester United star Fred. The midfielder was also struck […]
▶ Full story on thesun.co.uk

'He hugged me for five minutes and cried': Karl-Heinz Rummenigge on emotional farewell with Thiago   The Bayern Munich chief executive admitted Thiago Alcantara burst into tears and hugged him when his highly-anticipated...

Nyatama: Former Orlando Pirates midfielder joins Swallows FC   The 33-year-old has found a new home following his departure from the Lions of the North at the end of the 2019-20 season

Kimi Raikkonen mocked Lewis Hamilton's lifestyle but rock'n'roll Iceman is a dying breed in F1   Idolising the lifestyle off the track of maverick racing driver James Hunt comes as no surprise but unfortunately for Kimi...

Triathlete stops on finish line to let rival beat him after he heads wrong way in stunning act of sportsmanship   SPANISH athlete Diego Mentrida surrendered his spot on the podium as he allowed James Teagle to pass him on the...

Uncertainty surrounds Manchester City on the eve of their first Premier League game of the season   JACK GAUGHAN: It still all feels rather strange that the Premier League's top scorers, and a team boasting the Golden Glove...

Gareth Bale demand at Spurs recalled which helped turn him into world beater   Tottenham confirmed the return of Gareth Bale on Saturday seven years after he left Spurs for Real Madrid with the Welshman taking the No. 9 shirt...

Lawrence Shankland chalks first Premiership goal up to "magic and luck"   LAWRENCE SHANKLAND described his first-ever goal in the top division as "a wee bit of magic and a wee bit of luck" as he helped Dundee ...

Pep Guardiola wants new Man City contract - but wants to earn it first   The Man City boss was entered the final year of his contract at the Etihad but will be looking to earn himself a new deal despite speculation over his...

'Too many players' - Mourinho says Alli 'paying the price' as speculation grows over midfielder's future   The England international has been left out of the Portuguese manager's plans once again, with his position at the...

Goal.com ~ 10:53 AM GMT September 20, 2020
● PODCAST: Placheta to the rescue for City as the South Stand sing up   Norwich City had to fight back twice to earn a point against Preston as 1,000 fans returned to Carrow Road and you can listen to our review of the eventful...

FKF Elections: Muhoroni Youth, Chemelil Sugar chair Adagala fails to win Kisumu post   The repeat polls, that were allowed to be conducted by the SDT, saw chaos reported in various areas across the country

Tottenham manager Jose Mourinho 'interested in signing Manchester United forward Jesse Lingard'   Academy product Lingard has made just two substitute appearances in the Premier League since February and was not named in...

Daily Express ~ 10:38 AM GMT September 20, 2020
● Palace loss, transfers and what's next - your Man United questions answered   Get involved in our live Q&A to quiz our Manchester City correspondent Simon Bajkowski on all the latest transfer rumours and much more

Ole Gunnar Solskjaer's response to Victor Lindelof display against Palace   Lindelof had a torrid afternoon up against Wilfried Zaha and Andre Ayew who outmuscled the Swedish international as Palace earned a deserved 3-1 victory ...

LIVE: Nice vs PSG   The visitors will be without the suspended Neymar as they look to improve on two losses in their opening three matches - follow it LIVE!