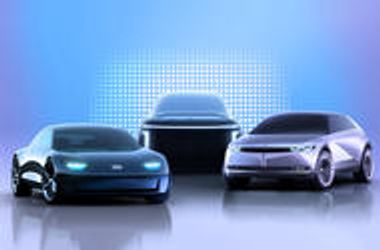 Image source : autocar.co.uk
Production versions of Prophecy (left) and 45 (right) will join new SUV in Ioniq electric range Korean maker will launch three new landmark EVs by 2024 as the first models in its new electric line-up Hyundai has launched a new Ioniq electric vehicle sub-brand as it gears up to unveilthree new significant EVs in the next four years . Sharing a name with the firm’s big-selling family hatchback - itself available in electric form - Ioniq will be used for each of the brand’s upcoming electric models, which will be told apart using a numerical naming strategy similar to Volkswagen’s ID line-up. Odd numbers will be used for SUVs and even numbers for saloons and other models.  The first production model to adopt the moniker will be the 2021 Ioniq 5, a compact crossover based on theradical 45 concept from last year’s Frankfurt motor show. It will be followed in 2022 by the Ioniq 6 electric sports saloon, which will take cues from thelow-slung Prophecy concept . A large, as-yet unseen SUV cal
▶ Full story on autocar.co.uk

PS Now October 2020 reveal same day as PS4 free games release on PlayStation Plus   SONY is having a bumper start to the next month, with the PS Now October reveal happening on the same day that the new PS Plus free games for...

Rebecca Judd sparks a fierce debate about toilet habits on live radio   Most ordinary people don't care to think about how others use the toilet.

Emma Roberts shows off her baby bump in a thigh-skimming yellow dress as she grabs coffee in LA   As she enjoyed a caffeine boost at Blue Bottle Coffee in Los Angeles on Tuesday, the 29-year-old actress dressed her blossoming...

Bella Thorne wears as wedding veil as she notes she is a 'happy girl'   The Shake It Up actress was seen in three new images where she had on a white lace wedding veil as the beauty wrote in her caption, 'Such a happy...

Andrew Marr: 'There is a drive on to destroy the BBC'   The veteran political interviewer on how his stroke has changed him, interviewing Boris Johnson and what he thinks of the rumours Charles Moore could be the corporation’s...

Chinese Zodiac Animal: What is a Water Ox and what year is it?   THE OX is valued in Chinese culture because of its role in agriculture: it’s a hard-working, honest animal. The Ox is the second of the 12-year cycle of animals...

Penny Lancaster reveals she has lost 17lb after 'shaming herself' with snap of her stomach   Many of us piled on the pounds during lockdown, and Penny Lancaster was no different.

Jake Gyllenhaal and Oscar Isaac to star in film   Gyllenhaal, 31, will be playing producer Robert Evans, while Oscar, 41, is set to portray legendary filmmaker Francis Ford Coppola, according to Deadline .

Google's Pixel 4A 5G costs more on Verizon because of millimeter-wave - CNET   Verizon's version of the new phone supports the fastest 5G tech, and that will cost you an additional $101.

Heart emojis meaning: A guide to using the symbols and when to use them   WHEN it comes to expressing feelings of love, finding the right words can be tricky – so a heart emoji can do the talking for you. But what does each one...