Who's The Boss? is coming back with original stars Tony Danza and Alyssa Milano on board the reboot 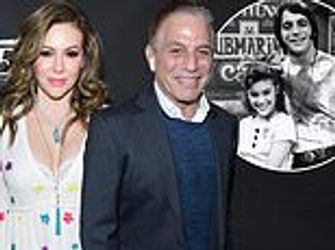 Image source : dailymail.co.uk
Danza and Milano starred as father and daughter on the ABC series that ran for eight seasons from 1984 to 1992. The rebooted sitcom will be set 30 years on from the series finale.
▶ Full story on dailymail.co.uk

Andrew Marr: 'There is a drive on to destroy the BBC'   The veteran political interviewer on how his stroke has changed him, interviewing Boris Johnson and what he thinks of the rumours Charles Moore could be the corporation’s...

Chinese Zodiac Animal: What is a Water Ox and what year is it?   THE OX is valued in Chinese culture because of its role in agriculture: it’s a hard-working, honest animal. The Ox is the second of the 12-year cycle of animals...

Penny Lancaster reveals she has lost 17lb after 'shaming herself' with snap of her stomach   Many of us piled on the pounds during lockdown, and Penny Lancaster was no different.

Jake Gyllenhaal and Oscar Isaac to star in film   Gyllenhaal, 31, will be playing producer Robert Evans, while Oscar, 41, is set to portray legendary filmmaker Francis Ford Coppola, according to Deadline .

Google's Pixel 4A 5G costs more on Verizon because of millimeter-wave - CNET   Verizon's version of the new phone supports the fastest 5G tech, and that will cost you an additional $101.

Heart emojis meaning: A guide to using the symbols and when to use them   WHEN it comes to expressing feelings of love, finding the right words can be tricky – so a heart emoji can do the talking for you. But what does each one...

Fiendish brainteaser asks how quickly YOU can spot the doe hiding among the stags   DOE a deer, a female deer, but how quickly can you spot where she’s gone? Hungarian artist Gergley Dudas, who often shares puzzles on...

Junior Andre proves he's inherited dad Peter's vocal chords as he shows off hidden singing talent    The teenager, 15, proved he had inherited his father Peter Andre's singing abilities as he crooned for the camera, while...

Michael Jackson son: Will Blanket Jackson follow in his father's footsteps? 'Possibility'   MICHAEL JACKSON performed better than many stars of his day - but will his youngest child Blanket follow in his footsteps?

Pixel 5 specs vs. iPhone 11, Galaxy S20 FE and OnePlus 8 - CNET   Check out how Google's latest flagship stacks up against its competitors' latest releases.

Kamala Harris and Hillary Clinton Got Together to Mourn RBG   In a clip exclusively shared with Glamour, Clinton and Harris have an emotional conversation about the late, great Ruth Bader Ginsburg.

Dan Walker shares new family picture that has pride of place in his home   Dan Walker shared a sweet new picture of his family to Instagram on Wednesday – but...