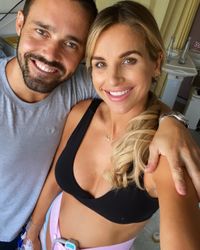 Image source : thesun.co.uk
SPENCER Matthews and Vogue Williams revealed their newborn baby is called Gigi Margaux. The former Made In Chelsea star, 31, and the Irish model, 34, have kept their second child’s name a secret since she was born last week. Now Spencer and Vogue have revealed their daughter is called Gigi Margaux – and they love […]
▶ Full story on thesun.co.uk

Penny Lancaster reveals she thought she had coronavirus but realised it was the menopause   The model wife of rocker Rod, 49, said she noticed her body changing during lockdown and feared her rising temperature was due to the...

Production wraps on Leonardo da Vinci drama starring Aidan Turner   It had been shut down because of the coronavirus crisis.

BreakingNews.ie ~ 10:17 AM GMT August 11, 2020
● When is TOWIE back? The Only Way Is Essex season 26 return date, cast and spoilers   TOWIE fanatics have been left without their fix of Essex drama this year. However, this is set to change as it has been announced that the...

Britney Spears spent over $1 million on legal fees for her conservatorship in 2019   The 38-year-old Gimme More singer's spending habits have been documented in new court papers, which were revealed on Monday.

21 Netflix gems you probably won't have watched before    For those who feel like they might have exhausted the Netflix's most popular...

Hellomagazine.com ~ 10:14 AM GMT August 11, 2020
● Black-ish episode airs two years after being pulled for being 'partisan'   An episode of the US sitcom pulled by ABC over concerns it was too anti-Trump is released on Hulu.

Mrs Hinch's beautiful floral dress might be her best bargain buy yet   Mrs Hinch has done it again – she's found an online fashion bargain everyone will...

Autocar ~ 10:07 AM GMT August 11, 2020
● Susannah Constantine reveals she's been sleeping OUTSIDE as her house is 'too hot'   The What Not To Wear star, 58, took to her Instagram over the weekend to post a picture of herself with an entire makeshift bed in her...

Stacey Solomon shares her brilliant back to school essentials - and you can buy them on Amazon!   Stacey Solomon is the queen of home organisation and it seems her love of planning also...

Hellomagazine.com ~ 10:03 AM GMT August 11, 2020
● Actress Isabelle Cornish does a a handstand completely topless    Isabelle Cornish is a known for being free-spirited, and on Tuesday she also proved she's rather agile.

Neymar can come of age and lead PSG to Champions League glory with Di Maria suspended and Mbappe an injury doubt   Neymar is now closer to 29 than 28. Ten years have gone by since he made his international debut for Brazil. In...

Inside Simon Cowell's Malibu beach house where he's recovering with broken back   Simon Cowell is currently recovering at his Malibu home after undergoing surgery for his...

Billie Eilish: No Time To Die theme song was recorded in UNIQUE way   BILLIE EILISH has conquered quite a lot over the past few years. While the star has shot into stardom, she herself has not changed much, nor have her...

Unleash the minstrels of pain! Mörk Borg, the metal role-playing game rocking lockdown   With its dungeons, entrails and metal-inspired hellscapes like The Hall of Cacophonous Screams, this Swedish game has hoovered up awards –...

The Guardian ~ 10:00 AM GMT August 11, 2020
● Louise Redknapp super chic black bikini claims to fit every figure   Louise Redknapp sent fans into meltdown on Monday – and it's easy to see why....

Coronation Street's Colson Smith displays his lockdown weight loss transformation   The actor, 21, continued to display the results of his workout regime as he departed the Coronation Street studios in MediaCityUK, Salford on...