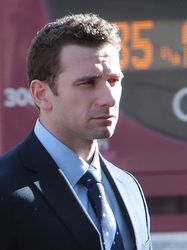 Image source : thesun.co.uk
AN RAF officer who admitted strangling his Squadron Leader partner when she threatened to leave him has walked free from court. A jury took just three hours to clear Flight Lieutenant Tim Barry, a 31-year-old helicopter pilot who called himself a “monster” in his evidence. He’d been accused of throttling his RAF superior Sqdn. Ldr […]
▶ Full story on thesun.co.uk

Boy, 17, who murdered mum-of-two Lindsay Birbeck named   His identity was revealed after reporting restrictions were lifted at Preston Crown Court.

Paisley shopkeeper battered after challenging booze thieves   The 55-year-old man attempted to stop the pair walking out of his St Mirren Street shop with alcohol they hadn’t paid for.

Davina From "Selling Sunset" Explained Her Response To Chrishell's Divorce And Said She's Happy With Her Portrayal On The Show   "I want to be neutral, and that does not mean that I defend Justin and don't...

Why Digital Won't Replace The Traditional Format Of Fashion Weeks   Given customer response to digital shows (or rather the lack of response), I believe the traditional fashion week format is unlikely to go anywhere.

Three Concepts You Can Steal From Media Trainers To Look Good In Video Interviews   There are several ways to prepare to succeed.

Collaborative Success In Healthcare Relies On Cloud Infrastructure   A pandemic has a way of showing us what's important.

Tell us what you think as almost 40% of A-level results have been downgraded   Some 35.6% of marks were adjusted down by one grade, 3.3% were brought down by two, and 0.2% came down by three

More space for cyclists and pedestrians are being created to help with distancing   North Lanarkshire Council received £1 million from the Scottish Government’s Spaces for People initiative to fund a range of temporary measures...

A-level students: NUS say this was 'one of the most traumatic years of their lives'   A-level results: NUS highlights trauma and disruption for students

Coronavirus Detected On Batch Of Chicken Wings Imported From Brazil, Chinese Officials Say   Authorities in China are urging consumers to be vigilant about imported meat and seafood following a spate of similar discoveries in...

Calls for urgent review into A-level results as students get downgraded   The Sixth Form Colleges Association said principals have found huge variations between the A-level exam grades predicted by teachers and the actual grades ...

Edinburgh road closed after large section caves in amid adverse conditions   Drivers have been urged to be aware of a 25-mile diversion in place while officials continue to work on fixing the road.

Daily Record ~ 11:30 AM GMT August 13, 2020
● Swotty git who took mocks seriously feeling smug as f**k   A STUDENT who bothered to revise for his mock exams is feeling unbearably pleased with himself as he waits to find out his A-level results.

This is crazy!' Moment ecstatic Scots lad wins £50k BMW and £10k cash    Robert Lawson couldn't contain his shock when competition runners finally got in touch with him.