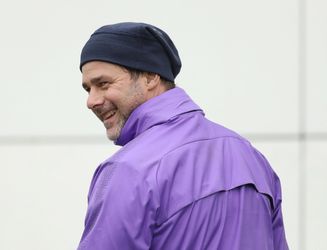 Image source : thesun.co.uk
MAURICIO POCHETTINO has not ruled out managing Tottenham’s arch-rivals Arsenal – and smiled when asked if he would take the Gunners job. The Argentine – who once famously said he would rather become a farmer in his homeland than manager Arsenal, has been strongly linked with the vacancy at the Emirates. Spurs axed Pochettino last […]
▶ Full story on thesun.co.uk

Bournemouth set to move for £35m ex-Chelsea striker Bertrand Traore   Bournemouth have plummeted down the Premier League table and need a signing to lift a squad that has been severely stretched by injury and suspensions.

Tottenham plot late swoop for key Rangers man as they eye reinforcements   Tottenham have been linked with a move for Rangers striker Alfredo Morelos, according to reports.

Real Madrid receive two loan offers for Bayern-linked Odriozola   The 24-year-old has struggled to make an impression under Zinedine Zidane, but two sides in La Liga are hoping to give him the chance to impress

Jack Robinson is poised to become Sheffield United's second signing of the January transfer window   Left-back Robinson, 26, passed the second part of his medical on Monday ahead of a £1m move from Nottingham Forest. He will pen ...

Solskjaer open to signing cover for Rashford amid talk of Man Utd interest in Cavani   The Red Devils boss says he is no nearer to getting any deals over the line, but is ruling nothing out with his top scorer now stuck on the...

Roger Federer: John Millman reluctant to look ahead to possible Australian Open showdown   John Millman and Roger Federer could meet in the third round if they win their respective next matches.

'We were in it until the last kick!' - Solskjaer claims Man Utd made 'strides forward' in 2-0 defeat to Liverpool   The Red Devils have faced criticism of their recruitment and current standards on the back of a reversal at...

Bruno Fernandes transfer to Man Utd held up by 'unusual' contract clause at Sporting   Bruno Fernandes is Manchester United's top transfer target after Ole Gunnar Solskjaer requested reinforcements but there have been major...

Gael Monfils admits playing too much PlayStation is behind hand injury as video games hit Australian Open hopes   WORLD No10 Gael Monfils has revealed he is suffering from a hand injury – caused by playing video games. Ahead of...

Timo Werner tweet sparks savage RB Leipzig dig at Chelsea after translation chaos   Chelsea target Werner's tweet was translated by a fan to mean he was on the way to Stamford Bridge – but the German's club RB Leipzig...

Paulo Dybala makes Paul Pogba transfer hint with Juventus eyeing return of Man Utd outcast   PAULO DYBALA wants Paul Pogba to return to Juventus – so they can make up more celebrations together. The duo spent a year together for ...

Anthony Joshua in talks with Deontay Wilder over undisputed fight later this year after Tyson Fury rematch   ANTHONY JOSHUA has revealed negotiations have begun for a potential undisputed heavyweight clash against Deontay...