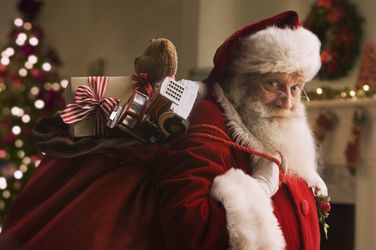 Image source : thesun.co.uk
BRITAIN faces a Santa shortage after a boom in grottos sent demand soaring. Requests for Father Christmases have poured in from shops, malls, theme parks and Winter Wonderland attractions. The UK’s only Santa training school has alone received 1,000 pleas. Many places are introducing grottos as an antidote to the General Election, which they fear […]
▶ Full story on thesun.co.uk

● East Kilbride food bank given a boost through Santa's grotto donations
Daily Record   - 06:00 AM GMT January 18, 2020
Recent News !
● Meghan Markle hits the road in Canada days before Queen strips her of HRH title   Meghan Markle was pictured driving to the airport to await the arrival of a friend.

The Courier ~ 08:50 AM GMT January 20, 2020
● There might be a bit of a design flaw with this bin lorry   Anybody worrying that AI and automation are going to make humans redundant in the near future should console themselves with the knowledge that things like this still...

75-year-old woman celebrates fostering over 600 kids in 50 years   Four of her children and three of her grandchildren have gone on to foster kids too.

Celebrities share their excitement over Brad Pitt and Jennifer Aniston reunion   The ex-couple had a sweet reunion at the SAG Awards on Sunday night, and Hollywood could not deal with it.

Chronicle Live ~ 08:45 AM GMT January 20, 2020
● 'Stranger Things' set gives major clue about the American's identity   A video tour of the "Stranger Things" set may have revealed a big clue as to who could be the American captive.

Lewis Capaldi gets chummy with Prince Harry amid whole royal exit palaver   Between the royal exit and Love Island, Lewis and Harry had a lot to gossip about.

Primary school in Llanrumney plans to move and expand into bigger premises at St Ederyn's development   St Mellons Church in Wales Primary School would move from Llanrumney to the new St Edeyrn’s development.

Iran has not ruled out talks to end nuclear dispute, says official   Iran said on Monday that it had not closed the "door to negotiations" in efforts to resolve a dispute over its nuclear agreement with world powers...

HS2 train line could cost £106bn - yet leaked report says it should go ahead   A leaked draft review by Doug Oakervee says there should be a six month 'pause' in High Speed 2 as costs spiral - but is said to warn...

Manchester United Cannot Hide The Gulf Between Them and Liverpool   Ole Gunnar Solskjaer’s side offered feeble resistance in the face of another dominant performance from the champions- elect.