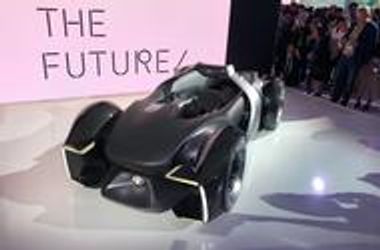 Image source : autocar.co.uk
2019 Toyota e-Racer concept at Tokyo motor show Concept revealed at Tokyo points to the capacity for autonomous cars to cater to driving enthusiasts Toyota has revealed an e-Racer concept at the Tokyo motor show , a two-seat, fun-to-drive car designed to re-emphasis the firm's belief that a future with autonomous cars will still have room for driving enthusiasts. The car was unveiled on stag
▶ Full story on autocar.co.uk

Kyly Clarke celebrates an early 39th birthday in style   The House Rules judge was treated to a lavish birthday party on Saturday.

Pregnant Dani Dyer celebrates her 24th birthday with surprise from boyfriend Sammy Kimmence   The pregnant Love Island star took to Instagram to share a glimpse of the presents she received from her beau, who in a gushing...

Andi Peters praises ITV for 'getting more black faces on TV' ahead of new role   Andi, who will be at the helm of the show, for two weeks from Monday August 10th to 21st, told how he welcomes a 'change of tradition' by...

Mirror ~ 10:51 AM GMT August 08, 2020
● Inside Pregnant Ashley James' glamping weekend with a friend   Taking to Instagram on Friday, the pregnant star, 33, gave her fans a glimpse at the trip in Osea Island, off the coast of Essex.

Erin Holland laments over being separated from her fiancé Ben Cutting   Erin Holland is stuck in Sydney after Queensland shut its border's to New South Wales, Victoria and the Australian Capital Territory on Friday.

Danielle Armstrong pens an emotional birthday tribute to her best friend Sammy.   The former TOWIE star, 32, took to Instagram to share a sweet snap with her pal, as they vowed to 'have a glass of bubbly in her honour,'...

Maya Jama stuns fans with snap of her lookalike mother's incredibly toned physique   The 25-year-old presenter's mother Sadie flaunted her incredibly toned frame as she posed up a storm on the beach for the sizzling social...

Jenny Ryan hints at joining I'm A Celeb   Jenny Ryan has hinted shes going to sign up for Im A Celebrity... Get Me Out Of Here!.

10 of the UK's best seaside cafes and beach shacks   Food writers and chefs pick their favourite chippies, pop-ups and cafes, all chosen for their creative use ofseafood Port Isaac has a medieval harbour, which once handled coal ...

Nik Sharma's recipes for summer fruit salads | Four favourite   Think beyond chunks in syrup: these salads are herby, tangy creations that you can serve as a side, starter or dessert Fruits are a great way to bring new flavours, ...

Don't add water: be inspired to plant a beautiful dry garden   As temperatures rise, could gravel gardens, such as Derek Jarman’s pioneering creation in Dungeness, be the answer to long, dry spells? In the summer of 1990,...

What are the new rules for face masks in the UK?   WEARING a face mask in shops became compulsory on Friday, July 24. The PM announced that masks will be mandatory in other indoor settings from August 8. Here’s everything you...

Brum's closest beach issues new rules after spate of trouble   The water park, near Nuneaton, said anyone under 18 will be removed from the park - unless with a parent or legal guardian in a new Covid-19 update