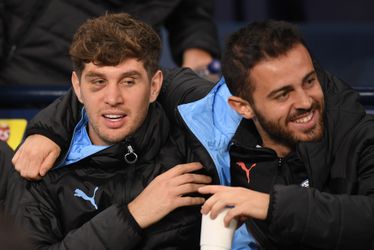 Image source : thesun.co.uk
PEP GUARDIOLA slammed his seat in anger as he ripped into John Stones for not being to get ready to replace Rodri during the clash Atalanta. Manchester City’s record summer signing hobbled off the pitch in the first half of the Champions League clash after he appeared to injure his hamstring. But the substitution appeared […]
▶ Full story on thesun.co.uk

● Pep Guardiola reveals what was said between him and Zinedine Zidane after Manchester City victory
Mail Online   - 11:17 AM GMT August 11, 2020

Ferrari first to confirm Racing Point appeal   Ferrari have become the first team to confirm they are pressing ahead with their appeal against the decision on Racing Point's car in F1's 'copying' row.

Dundee United 0 Hibs 1 as Christian Doidge's winner keeps Jack Ross' side top   With all eyes on Scottish football now, the game was low-quality throughout.

Ronaldinho's 'been hosting parties with models in Paraguay in alleged breach of house arrest terms'   The former Barcelona star has endued a nightmare five months in Paraguay after being arrested for attempting to enter the...

Who is Liverpool's new left back Kostas Tsimikas following his £11.75m move?   Liverpool have been looking for cover for Scotland captain Andy Robertson. The Premier League champions have found their man in Olympiacos left back...

Mbappe ready to play for PSG in Champions League clash with Atalanta following ankle injury, Tuchel confirms   The Ligue 1 champions' top scorer had seemed certain to miss out after suffering a nasty knock in the Coupe de...

Loughborough Uni 0-6 Bolton Wanderers - Big match talking points   WANDERERS got among the goals once again in their third pre-season outing against Loughborough University – but the day was marred by a serious injury to Dennis...

David Silva to join Lazio on three-year deal after leaving Manchester City   * Attacking midfielder’s 10-year stay at City is ending * Spaniard confident he has five years left at the topDavid Silva is joining Lazio on a...

York City star Kieran Green leaves to play at higher level   KIERAN GREEN has rejected a further improved deal with York City and has left the club in order to play at a higher level.

Arouna Kone: Sivasspor extend Ivory Coast striker's contract   The 36-year-old will continue his adventure in Turkey next season after penning an extension to remain in Riza Calimbay's team

Højbjerg 'very proud and excited' after completing £15m Spurs move   * Midfielder joins from Southampton on five-year deal * Højbjerg: ‘The players and the coach are world class’Pierre-Emile Højbjerg says he is “very proud,...

Liverpool transfer stance on Gini Wijnaldum with shock contract update amid Thiago links   Gini Wijnaldum and Liverpool are not currently in negotiations over extending the Dutchman's Anfield stay.

Chelsea manager Frank Lampard gives green light for Marina Granovskaia to sell ace   Chelsea are set to have a busy summer in the transfer market.

LIVE: Wolves vs Sevilla   Nuno Espirito Santo's side continue their European adventure with a trip to face the Spanish side in Germany - follow the action LIVE on Goal!

Happily Ever After? Harry and Meghan Will Settle for Normal   In “Finding Freedom,” the veteran reporters Omid Scobie and Carolyn Durand show how the British royal family’s fairy tale turned into a cautionary one.