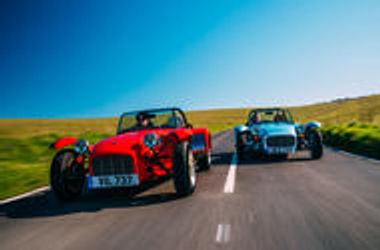 Image source : autocar.co.uk
Retro-styled take on the entry-level 270 offers bespoke body design and distinctive engine note Caterham has revealed the new Super Seven 1600 as a retro-inspired take on itsflagship open-wheel sports car .  Available to order now, the new model draws on the British brand’s heritage, as did the limited-run Sprint and Super Sprint models from 2016 and 2017. Unlike those cars, though, it is a permanent addition to the Caterham line-up. The Super Seven 1600 is powered by the same 1.6-litre Ford Sigma engine as the brand’s entry-level 270 model , meaning it can crack the 0-62mph sprint in around five seconds and hit a top speed of 122mph.  Mechanical changes are limited to the addition of DCOE throttle body injectors - said to provide a "distinctive growl" reminiscent of 1970s rally cars - and chrome-finished K&N air filters, which complement the car’s retro-inspired styling.  The new arrival - available in standard and wider SV form - retains the Seven's familiar silh
▶ Full story on autocar.co.uk