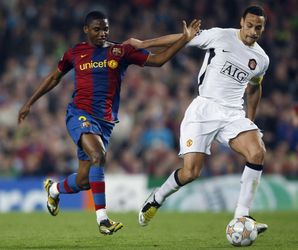 Image source : thesun.co.uk
MANCHESTER UNITED legend Rio Ferdinand has revealed that he was “close” to joining Barcelona in 2008 after speaking to boss Frank Rijkaard. The centre-back had just skippered the Red Devils to a 0-0 draw in the first leg of the their Champions League semi-final at the Camp Nou when the Dutchman made his intentions clear. […]
▶ Full story on thesun.co.uk

Call of Duty: Warzone | Coalition vs Allegiance | "Otter - Skriniar" vs "Krueger - Umtiti"   Who should make it into the "Coalition VS Allegiance" ultimate team?

Pigeon racing becomes first sport to return to England as 4,000 birds take flight with football, golf and F1 to follow   ENGLAND’S finest wingers have finally welcomed back high level sport from the misery of lockdown. And...

FA suggest they will NOT punish players for making George Floyd tributes when Premier League returns   PREMIER LEAGUE aces have been given the green light to take a knee in support of race equality by the FA. The growing...

The Sun ~ 14:17 PM GMT June 02, 2020
● Travis Head's deal with Sussex is put on hold   Travis Head has deferred his overseas contract with Sussex until next season.

The footballer who signed his first EFL contract a fortnight before lockdown   After years of waiting for his Football League debut, Paco Craig was finally getting his chance aged 27. Then a pandemic arrived By Gavin Willacy for ...

Tyron Woodley explains why he turned to cannabis oil to help with UFC injuries   The UFC welterweight star explained on Mike Tyson's 'Hotboxin' podcast how he turned to CBD oil, which has become a popular natural...

The Sacrosanct Endowment? Not Anymore for Some Arts Groups   Some cultural organizations, staggered by the financial upheaval caused by the coronavirus pandemic, are dipping heavily into their endowments. Others are thinking...

10 Things That Keep Norah Jones Grounded   The musician shares the movies, podcast, book and music that top her list of cultural essentials.

Bruno Fernandes outlines long-term vision after bright start to Man Utd career   Bruno Fernandes has been a stand out performer since joining Man Utd but he is still desperate to improve at what he calls "the best club in...

Keeping Saints players mentally fit vital during lockdown, says boss Jim Goodwin   The Buddies squad now have access to counselling thanks to a new link up with Kibble.

Could extended Man United stay help Ighalo build Premier League legacy?   The ex-Nigerian striker gets to live the dream for a while longer, but what would constitute success when he leaves in January 2021?