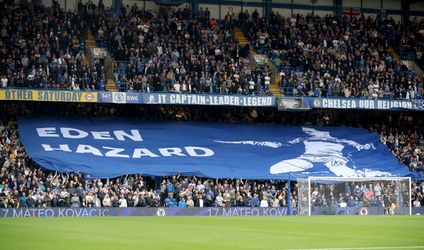 Image source : thesun.co.uk
EDEN HAZARD hasn’t been a Chelsea player for over three months but he still has a place in fans’ hearts – as they showed with a baffling banner on Sunday. Before facing Liverpool, a huge tribute to the Real Madrid winger was unfurled in the Stamford Bridge home end. Liverpool fans responded with a chant […]
▶ Full story on thesun.co.uk

● Courtois and Hazard had secret code to discuss Real Madrid while at Chelsea before making dream transfers
The Sun   - 11:06 AM GMT May 25, 2020

'We have them too' - Haaland unfazed by Bayern's World Cup-winning defenders ahead of crucial Klassiker   Tuesday's fixture could be the biggest game of the Norwegian's career, with Borussia Dortmund's Bundesliga...

Tottenham could still sign Coutinho, says ex-goalkeeper Robinson   The former Liverpool star's future remains unsettled as he is set to depart Bayern Munich following his loan spell with the Bundesliga side

Michael Bisping explains why he has no regrets over UFC retirement   UFC COLUMN: Michael Bisping retired from UFC in 2017 after losing out to Kelvin Gastelum and George St-Pierre – but the Brit has said he is ‘very proud of what ...

British GP set to go ahead after Johnson U-turn on Silverstone F1 double header   In a huge boost to Silverstone's chances of hosting a double header this summer, it emerged on Monday that Boris Johnson has intervened to...

Loader to leave Reading with PL clubs on alert   Wolves are among a number of Premier League clubs considering a move for Danny Loader, who will leave Reading when his contract expires next month.

Mike Tyson shows shredded physique in gym workout with MMA legend Vitor Belfort   Mike Tyson has been teasing a comeback to boxing in his latest interviews – and footage from his latest training session with MMA hero Vitor...

Scott Brown hails James Forrest as quiet man who has been front and centre of Celtic's nine-in-a-row run   SCOTT BROWN is closing in on Bobby Lennox to become the most decorated Celtic player in history, with the club’s latest...

Niskanen is Dundee United target as Premiership new boys line up £250k move   The winger is one of a number of transfer targets for Robbie Neilson and sporting director Tony Ashgar.

Jamie Redknapp: Rangers manager Steven Gerrard has "got it" - he'll replace Jurgen Klopp at Liverpool   HIS second season at Rangers may have once again, albeit in unusual circumstances, ended trophyless and the...

Richard Foster: Clubs axing kids to save money is like putting a sticking plaster on a shotgun wound   NOT having his contract renewed by Ross County amid the coronavirus pandemic and football shutdown has left Richard Foster...

Premier League looking to get fans in stadiums digitally to boost atmosphere - EXCLUSIVE   Premier League games will be played behind closed doors after the coronavirus outbreak.