Barcelona joy as Messi, Griezmann and Suarez prepare to start together for first time this season in Granada clash 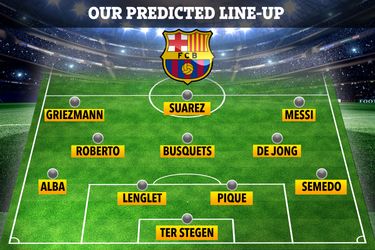 Image source : thesun.co.uk
BARCELONA are preparing to unleash Lionel Messi, Antoine Griezmann and Luis Suarez together for the first time this season against Granada. The star trio featured for half an hour of the 0-0 Champions League draw with Borussia Dortmund as Messi eased his way back in after injury. But now, with Barcelona desperate for a La […]
▶ Full story on thesun.co.uk

Hart: I was fairly concerned when Guardiola arrived at Man City   The former England goalkeeper has revealed he saw his exit from the Etihad coming once the Spaniard was appointed

EXCLUSIVE: Rafa Benitez opens up on Liverpool's greatest night   Fifteen years to the day since Liverpool won the Champions League in Istanbul, Rafa Benitez chats exclusively to the ECHO

Kerry hurling should be helped build their own kingdom   All these years on, those cheeky boyos below in Lixnaw in north Kerry still can’t resist having a go at me.

Tom Brady holes epic chip shot during The Match as he swaps NFL for golf   Tom Brady is competing with fellow NFL legend Peyton Manning and gold superstars Tiger Woods and Phil Mickelson in The Match: Champions for Charity,...

Government approves close-contact training   The UK government has released its 'phase two' guidance for athletes and elite sportsmen and women to make a phased return to close-contact and competitive training, provided...

Rafa Benitez wants Newcastle return and has transfer targets already lined up   Rafa Benitez spent three seasons at Newcastle before heading to China – but the Spaniard could return to St James’ Park if they can bring John...