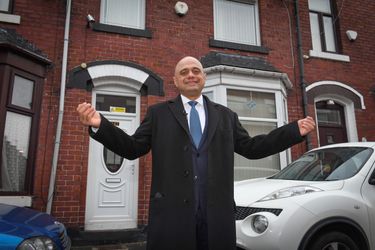 Image source : thesun.co.uk
GROWING up on Rochdale’s mean streets in the early 1970s, Sajid Javid always checked the colour of the skinheads’ laces on their bovver boots. The National Front thugs used to stone and spit on him as a six year-old on the way to school. The young Asian boy, who grew up to be Britain’s first […]
▶ Full story on thesun.co.uk

● Sajid Javid issues post-Brexit warning to business leaders as he insists there'll be 'no alignment' with EU on regulation
Evening Standard   - 07:45 AM GMT January 18, 2020

Gordon Ramsay's son shuns cooking to join Royal Marines   Jack Ramsay, 20, recently admitted on a Channel 4 show that ‘I have grown up in a bubble. I've never had to fight or do anything for myself"

Ryanair demanded £230 from cancer patient who was too sick to fly   Colin Old wanted to give his ticket to his son but was told to pay twice the original amount of the flight.

Tom Baker was one of the great HIGNFY guest hosts and this why   It’s Tom Baker’s 86th birthday today so, ahem, travel back in time to enjoy these moments from when he guest hosted Have I Got News For You. As shared by...

WalesOnline ~ 14:04 PM GMT January 20, 2020
● For Straight Edgers, Every Month Is Dry January   They did the "my-body-is-a-temple" thing before it was mainstream. We hear more about how and why they went straight edge.

VICE ~ 14:04 PM GMT January 20, 2020
● What Lisa Nandy gets right, and Jess Phillips gets wrong, about Labour's hustings   Labour's hustings format only tests one aspect of leadership, but it's still an important one. "...

Smoke seen after West Bromwich fire   Smoke could be seen along the M5 motorway after a fire in West Bromwich.

Building An MLS Power? Get Moving On Those Green Card Applications   Amid the anticipation of Chicharito’s arrival at the LA Galaxy, Atlanta United and FC Cincinnati this month made a different kind of roster move this January...

Fan view: Transfer window may yet hold twists and turns for Caley Thistle   I wouldn’t imagine there were too many neutrals in the crowd of 590 at the Indodrill on Saturday, but any that were there would have loved this game...

Neighbours spoilers: Ned fights to protect Yashvi from violent stalker   Ned's past is coming back to haunt him.

Chemists should tell obese customers to lose weight, NHS guidance says   New guidance from the National Institute for Health and Care Excellence (NICE) has urged pharmacists to 'start conversations' about their...

The World Economic Forum Jumps On the Artificial Intelligence Bandwagon   It’s great to see the WEF taking a strong look at AI and then presenting what looks like a very good, introductory, toolkit for boards of directors, but...

Hidden Gems   A new study finds that over 95% of women do not use a financial advisor when going through a divorce despite having a list of monetary goals they want to meet.