Steven Gerrard reveals how he nearly became an Everton fan 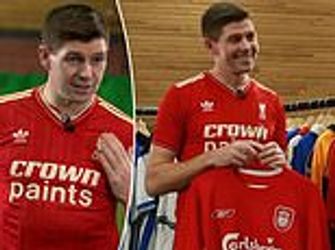 Image source : dailymail.co.uk
The former Reds captain, now manager of Rangers, revealed that he chose which club to support while watching the 1986 FA Cup final between the two Merseyside rivals as a five-year-old.
▶ Full story on dailymail.co.uk

Manchester United news and transfers LIVE   Follow throughout the day for the latest Man Utd transfer rumours, breaking news and injury updates plus the latest on Jadon Sancho.

Man City news and transfers LIVE   Stay tuned for the latest Manchester City news in the build up to tonight's game against Real Madrid.

LIVE Malaysia Super League & national team football news: Kelantan attract takeover interest...from a Johorean   We keep you up to date with all the latest news from the domestic top flight and the national team.

Bolt: I didn't get a fair chance during football trial in Australia   The world's fastest man failed to earn a contract after a brief trial with Central Coast Mariners in 2018

Goal.com ~ 02:03 AM GMT August 07, 2020
● Football on TV: Matches to watch & stream in Malaysia this weekend   The UEFA Champions League returns to your television this weekend!

Workers at Philadelphia Museum of Art Vote to Join Union   The election came after months of debate over whether complaints over the workplace environment at the museum could be addressed through top-down reforms, instead of...

Justin Rose tied with Brooks Koepka as the US PGA Championship begins   Tiger Woods, Brooks Koepka and Justin Rose revealed their intentions to get the first major in 13 long months off to a rousing start at the 102nd US PGA...

Mail Online ~ 23:28 PM GMT August 06, 2020
● Cormac Sharvin roars to top of leaderboard at English Championship after 63   Northern Ireland golfer one clear of the field after opening round

WWE hero Marty Jannetty claims he 'beat man with brick and threw him in river'   Former WWE star Marty Jannetty has expanded on his claims that he made a man 'disappear' many years ago and detailed what he did when the...

FIFA 21 pre-order bonuses: Champions Edition, Ultimate Edition & Standard edition differences   Here's what you need to know about what makes each version of the different FIFA 21 editions unique, including their perks,...